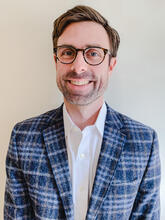 A writer, scholar, and translator, he spent a year in Bogotá, Colombia on a Fulbright fellowship while translating into English works by the country’s national poet, José Asunción Silva. His translations or poems have appeared in Inventory, The FSG Book of 20th-Century Latin American Poetry, Guernica, Exchanges, The Brooklyn Rail, The Chronicle of Higher Education, and elsewhere. His scholarly work has been published in Performance Research, The Latin Americanist, Textos Híbridos, and Musée Magazine.

Francis’s forthcoming book is Footwork (2021), the first collection of English-translation poems by the award-winning Cuban novelist, poet, and painter, Severo Sarduy (1937 - 1993). Currently, Francis is working on a new translation project that focuses on poets from Northern Mexico.

ER&M 333: Mexico and the Migratory Lyric