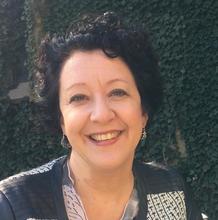 Alicia Schmidt Camacho is Professor Ethnicity, Race, and Migration, and holds affiliations with the Center for the Study of Race, Indigeneity, and Transnational Migration, the Council of Latin American and Iberian Studies, and the American Studies and Women’s, Gender, and Sexuality Programs. Her scholarship examines migration, social movements, and cultural politics in North America. She has written articles about transnational labor organizing, gender violence and feminicide in Mexico, border governance, and migrant expressive culture. Her book, Migrant Imaginaries: Latino Cultural Politics in the U.S.-Mexico Borderlands (NYU 2008), received the Lora Romero First Book Prize in American Studies. She is currently writing a second book for NYU Press entitled The Carceral Border, a study of the ways unauthorized migrants have confronted state and social violence along their passage through the North American migratory circuit since the 1980s. Another book project, derived from the 2019 Tam Tran Lectures in American Studies at Brown University, entitled Migrant Justice, considers the significance of defending human mobility in the contemporary era of mass deportation and border construction. This project takes up the examples of marronage and other historic contestations to sovereign power to theorize how migrants cultivate freedom within and apart from nation-states. Alicia’s courses examine the histories of race making, colonialism, and slavery in North America, migration and border governance, and the formation of transnational Latinx communities in the U.S. She served as Associate Head for Ezra Stiles College from 2008-2020.

In 2017, Alicia formed the Migrant Justice Initiative, a multidisciplinary project for scholars to document and engage with migrant-led organizing, and to shape better understandings of migrant realities in the Americas. Partners have included the Global Labor Justice Project and the National Day Laborer Organizing Network.  A longtime resident of New Haven, Alicia contributes to local organizations involved in labor, civil, and immigrant rights, including Junta for Progressive Action, Inc., and the Connecticut Bail Fund. She works with feminist and political advocacy organizations in the U.S. and Mexico to address the concerns of migrants and other vulnerable transborder populations.