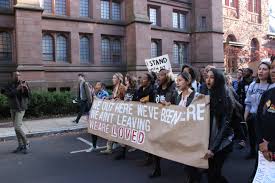 Last semester, the chant “We out here. We’ve been here. We ain’t leaving. We are loved,” reverberated around campus, as over 1,000 students took to the streets and filled Cross Campus in a massive “March of Resilience” to show solidarity against racial injustice. This semester, the chant will be heard once again, this time in the classroom.

On Friday, more than 50 students gathered in a seminar room in 81 Wall St. — lining the walls and sitting on the floor — to vie for one of the 18 spots in African American Studies professor Matthew Jacobson’s class, “Politics and Culture of the American ‘Color Line.’” In light of a series of racially charged events that occurred at Yale last fall, Jacobson has redesigned the syllabus for his class, organizing the readings into four sections, each corresponding to the elements of the student-activists’ chant. In particular, Jacobson’s syllabus cites the work done by Next Yale, a coalition of students advocating for racial justice on campus. Students said Jacobson’s decision validates many of the concerns surrounding racial injustice that they raised outside of an academic setting.

“I adopted the Next Yale chant because, upon reflection, I saw it as potentially structuring a useful approach to the course’s general questions about the politics of past and present,” Jacobson told the News in an email. “We [out] here (this is what the present looks like, from where I stand); we been here (we stand atop a deep history); we ain’t leaving (here’s what resistance and the insistence upon justice and equity look like); we are loved (protest traditions — like the black radical tradition — are not simply about rage, they are about love).”

Jacobson said his class has always focused on current events, like the 1999 New York Police Department shooting of the unarmed immigrant Amadou Diallo and the election of America’s first black president. Last semester’s controversial events became the obvious current issue to use as a frame for this year’s class, he explained, not only because it is on everybody’s minds, but also because it has so many dimensions. He added that the student movement brings up questions regarding microaggressions, the “post” of “post-Civil Rights” and issues of defining and combating institutional racism.

The first assigned reading for the course is the book “Jim Crow Wisdom” written by Yale College Dean Jonathan Holloway. Jacobson said it seemed especially apt to begin the seminar with that particular work, as Holloway — who is the first black dean of Yale College as well as a scholar of African-American history — is a figure much on the minds of many students. The book has much to teach about race at Yale, Jacobson said, and it is very interesting to read in the context of the “explosion” of this past October and November.

This is not the first time Jacobson has engaged with campus advocacy. Alex Zhang ’18, who took a seminar taught by Jacobson last semester, said Jacobson cancelled class on the day of the March of Resilience to allow his students to attend or participate. On that day, Jacobson sent an email to the class saying that sometimes what happens outside the classroom is more important than what is happening within, Zhang said.

Students who shopped “Politics and Culture of the American ‘Color Line’” said they felt Jacobson’s adjustments prove the possibilities for an education do not end with a lecture or discussion.

“I haven’t taken any classes at Yale that relate to racial politics, and I think that especially given the movements last semester, it’s become very clear how important this is to U.S. political history,” said Aia Sarycheva ’16, who attended the first session. “After taking this class, I hope to gain an understanding of U.S. racial politics and its historical context.”

Zhang said the changed syllabus shows students that what they learn at Yale can be directly relevant to their day-to-day lives and that professors are willing to and want to engage with them. It demonstrates that professors are willing to admit that sometimes they are the students and validates the questions students raised, he added. Using the chant as a framework allows people to rethink what the possibilities of an education can be within an elite university like Yale, he said.

“This is a class that has always focused on thinking historically about the present — the past is not ‘behind’ us, but is in some sense the ground we stand on,” Jacobson said. “The past is what the present is made of.”

Jacobson specializes in race in U.S. political culture from 1790 to present.