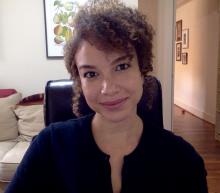 Dixa Ramirez is Assistant Professor of American Studies and Ethnicity, Race, and Migration at Yale University. Her first book, Colonial Phantoms: Belonging and Refusal in the Dominican Americas, from the 19th Century to the Present is forthcoming from NYU Press. Her work has been published in Atlantic Studies, The Black Scholar, Comparative Literature, Small Axe, Avidly, and in the Dominican media. She is currently working on her second book, Blackness in The Hills: Geographic Isolation and White Supremacy in Dominican and U.S. Nationalist Imaginaries.

I often wonder how it has been possible for so much scholarship about the Americas, including American studies, Latinx and Latin American studies, and African diaspora studies, to proceed without attention to the experiences, contributions, or even existence of black Latinx subjects. But what excites me most about black Latinx studies, and especially the work driven by Afro-Latinx feminisms, is what there is after, before, or beyond representation.

Most of us concerned with Afro-Latinx feminisms would probably agree that representation matters, especially because black Latinas have been erased, whitewashed, or celebrated for specific cultural contributions without accompanying political and historical inclusion. However, as Peggy Phelan cautions, “while there is a deeply ethical appeal in the desire for a more inclusive representational landscape and certainly under-represented communities can be empowered by an enhanced visibility, the terms of this visibility often enervate the putative power of these identities.”[x] Heeding this warning, how do we satiate our thirst for stories of influential black Latinx subjects while also producing the more radical work that the framework of Afro-Latinx feminisms inspires? Can we remain attentive to the Dominican Studies Center’s research about Jan Rodriguez, a 17th century “mulatto” from Hispaniola and the first non-native settler in Manhattan, as well Jack Forbes’s work on the black Latinxs who founded the first California missions, without perpetuating patriarchal, Eurocentric frameworks? While these cases subvert paradigms in which only white men propel history, they also propagate phallocentric definitions of civilization and progress as tied to land partition, labor, and capital accumulation.

There are varied responses to this dilemma, as the other responses in this roundtable demonstrate. It can include, for instance, a return to the work of ignored black Latina scholars who illuminate the exclusion of blackness in nationalist contexts (Rivera-Rideau); a reconsideration of how Afro-Latinx feminism can illuminate corners darkened even within Latinx feminist work (Zamora); and the pan-Africanist efforts of a white-presenting Latina activist such as Ana Livia Cordero (Plácido). In my forthcoming book, Colonial Phantoms: Belonging and Refusal in the Dominican Americas, from the 19thcentury to the Present, I chew over the question of how the very erasure of certain forms of blackness, specifically Dominican blackness, structures the Americas. That is, this erasure itself forms part of the scaffolding of this hemisphere. To inquire what it means to be American, Latin American, Latinx, Puerto Rican—and concomitantly, what it means to be a citizen versus stateless, a refugee versus an undocumented immigrant, a “protected” female body versus a female body that can be violated with impunity (and for profit)—and so on, is to already get at questions beyond representation. When we point out that the world as we know it was shaped by black Latinx subjects as settlers (in all their problematic glory), merchants, writers, artists, and in every possible subject and labor category, we are also rejecting Western ideals of who is fully human. Considering the violent costs of dehumanization, how can we not desire to do so?

And yet, inspired by the work of Afro-Latinx feminisms and other branches of African diasporic thought, I find myself wondering about those spaces beyond (or before, underneath, after?) representation. I am excited by the work of Afro-Latinx artists and scholars, and others working in this field, who engage with issues of subterfuge, surveillance, and various forms of visibility. I think of the women I write about in Colonial Phantoms, including the nineteenth-century poet Salomé Ureña and the present-day authors and performers Chiqui Vicioso, Amara la Negra, and Maluca Mala. I also think of the incredible interventions of Afro-Dominican artist Firelei Báez, whose pieces centralize how blackness and femininity intersect with canonical Western (patriarchal and Eurocentric) imaginaries.

For about a year, I have been grappling with a large cache of early twentieth-century photographs that portray Dominicans in strange, almost nonsensical ways. These images and their captions nudge me away from searching for what I can clearly articulate, see, and understand. Perhaps my question is not so much “what is there beyond representation?” but, instead, “how do black Latinx subjects elide hardened racial and ethnic categories?” Reid-Pharr writes: “Thus enslaved and colonized people must remain particularly attentive to the art of dissimulation, the art produced from within the lie of an always already deadened human subjectivity.”[xi]Terms such as dissimulation, subterfuge, and elision subtly reveal what I am trying to get at. What is the value of representation when black Latinx subjects have a history of dissimulation in order to slip away from white supremacist surveillance? As such, I am not rejecting projects of representation and visibility, per se, but expressing a hunger for what is difficult to articulate. What if we look beyond the “commonsense” of identifying important “firsts,” and embrace the nonsense that might not even be recognizable human, or, more to the point Human (as in the Enlightenment model of Manhood)? Might this line of inquiry lead us towards an “ecumenically human [that is, homo sapiens] interpretation,” to cite Sylvia Wynter, that, in our current moment, might help save us from total environmental and political catastrophe?[xii]Can we afford to move away from the work of redress and representation and think much more broadly about what it means to be human? Can we afford not to, considering the impending environmental and political catastrophes that face us? On the other hand, in this era of anti-Latinx immigration, Black Lives Matter, white domestic terrorism, and the Trump administration, I’m just not sure. As the conversation in this roundtable demonstrates, the two impulses are likely entangled.