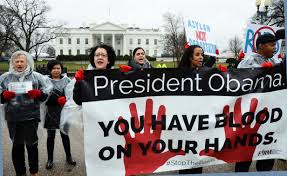 They joined 11 other advocates from around the country in a civil-disobedience action organized to call attention to the plight of undocumented families being torn apart by federal immigration raids and sent back to their native lands to face deadly gangs.

As part of the action, organizers planted 83 crosses.

“These crosses stand for 83 immigrant deaths that took place in 2014. All 83 immigrants came here to escape the terrible violence taking place in their home countries” and were killed upon their return, Matos told the crowd. ““Instead of welcoming them and giving them the protection that they so desperately needed, our government arrested them, put them in detention centers, and deported them … Angel Diaz was shot to death on a bus four days after being deported. If the raids and deportations continue, President Obama will be responsible for the possible harm or even death of hundreds of thousands of innocent people. Their blood will be on his hands.”

“As people of conscience, we have a responsibility to hold our government accountable for the needless loss of life and terror arising from misdirected deportation policies. The Central American refugees who have been denied protection are not strangers or lawbreakers—they are our parents, our sisters and brothers, our neighbors and friends; they build our communities as they work beside us, send their kids to school, and worship with us. If we deny their claims to refuge, we deny the most basic values of we the people,” declared Schmidt Camacho, a Yale professor who teaches American studies and ethnicity, race, and migration.

The New Haveners arrested have been at the forefront of organizing against the raids since the raids resumed last month. Click on or download the above sound file to listen to a recent episode of WNHH radio’s “Dateline New Haven” in which Matos and Rivera-Forastieri spoke at length about the issue and their efforts.