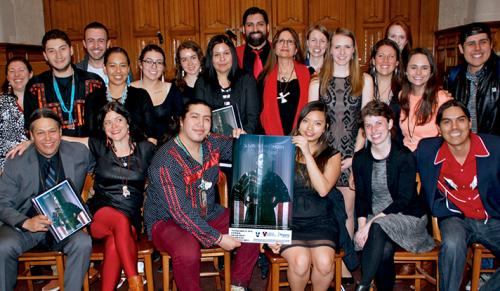 The Yale Group for the Study of Native America (YGSNA) has launched a three-year pilot program to support indigenous performing arts at the university. The Yale Indigenous Performing Arts Program (YIPAP), which officially began in September, is headed by Mary Kathryn Nagle, a nationally renowned playwright, member of the Cherokee Nation, and partner at Pipestem Law Firm, P.C.

Nagle first came to Yale last March to mount her play “Sliver of a Full Moon” in the Yale Law School auditorium. With a cast of 15 — including Native students at Yale, professional actors, and domestic violence survivors — the drama traced the years-long struggle by tribal leaders and activists to pass the 2013 Violence Against Women Act.

“It was a transformative experience for the students, who performed in front of more than 300 people, including well-known judges and tribal leaders,” said Nagle. “Students came up to me and said they had never seen a play with Native people on stage before in their entire lives. Not ever. We can tell our own stories. We don’t have to watch white people pretend to be us, which is a revolutionary act in the U.S. right now.”

After the performance of “Sliver of a Full Moon,” Nagle kept in touch with students and faculty at Yale, including Ned Blackhawk, professor of history and American studies, and program director at YGSNA. “We saw the need for and value of indigenous performance on campus so that Native students have a chance to see themselves reflected in the art around them,” she said.

YIPAP has since mounted a second play Nagle authored, “My Father’s Bones,” with an all-student cast, and brought a theater group to campus. The group is also sponsoring a film festival, “Through Indian Eyes,” from Nov. 30 to Dec. 5. The goal is to include members of Yale’s Native American student community in the productions and programs.

According to Blackhawk, Nagle has “an incomparable ability” to translate American Indian legal issues into dramatic form. “Mary Kathryn’s plays have helped to enrich and heal our community,” said Blackhawk. “It is a cathartic process for not only those who witness the play, but for those who perform in it. Some of the students are learning for the first time about these subjects and doing so in an experiential way. It connects them with their own families’ and communities’ struggles for justice, and empowers them to speak and articulate their own concerns.”