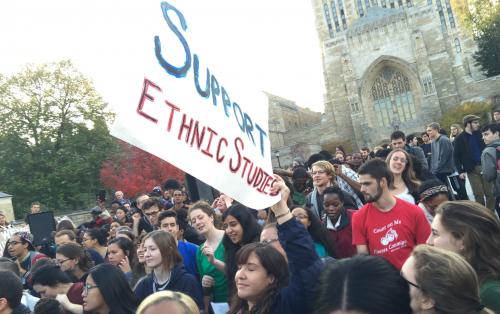 With the multicolored messages from last Thursday’s chalking event still visible on the pavement, students and supporters gathered once again on Cross Campus yesterday to stand in solidarity after a week of impassioned discussions about race at Yale.

But student organizers and participants said Monday’s March of Resilience — in which hundreds marched from the Afro-American Cultural Center to Cross Campus — had a markedly different tone from the tense confrontation with Yale College Dean Jonathan Holloway that took place at the same location last week. Student leaders at the event, which eventually attracted over 1,000 students, faculty and administrators, gave speeches about student power, solidarity and unity. The event also featured musical and cultural performances. Ultimately, the gathering transformed into an impromptu dance party on Cross Campus, which students said allowed them to join together as a community to turn the tide of campus conversation.