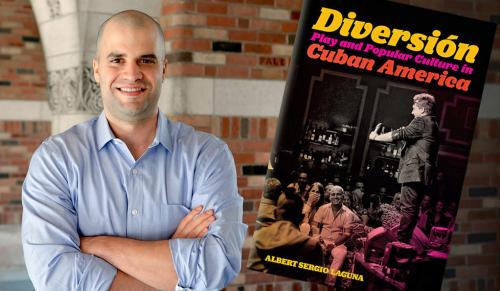 There was a time when Albert Laguna thought his father was the funniest man in the world. Until, that is, he began to research the topic of popular culture in Cuba for his recently published book and realized that his father had been stealing quite a few of his jokes from the popular Cuban comedian Guillermo Alvarez Guedes.

Famous for his one-liners, Alvarez Guedes released over 32 joke albums, and made appearances on television, in movies and on radio. Despite the fact that the comedian has permeated Cuban American culture, “no one has ever written about his social importance and the consequences of his work,” says Laguna, adding that it the first thing he thought of when reading scholarship on Cuban Americans. “Cuban American studies has mostly focused on the pain of exile, but then you have this comedian who is the soundtrack for the quotidian life of so many. Everyone knows him. Cubans grows up listening to his albums at home, and people — including my own father — retell his jokes constantly.”

Laguna, assistant professor of American Studies and Ethnicity, Race & Migration, used the stand-up comedy of Alvarez Guedes and other forms of comic popular culture to weave a story about the cultural, political, and even economic complexity of Cuban life in the United States. “It is also through humor that you can understand racial tensions in Miami between Cubans and African Americans, discrimination faced by Cuban Americans, and ties between Cubans on and off the island,” says Laguna. “Comedy is a complex site for understanding a range of social relations.”