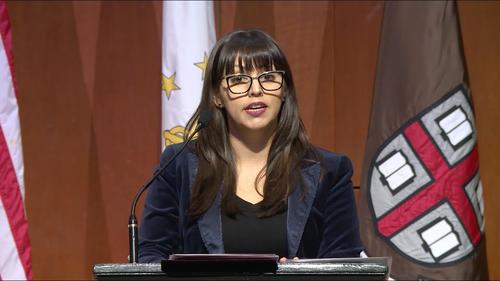 The scholar who grew up in Uvalde remembers hearing stories around the dinner table about Anglos and Mexicans, rangers and raiders, soldiers and ranchers whose histories intertwined in South Texas. Over barbecue at family gatherings and at home, she learned about the history of the civil rights movement in South Texas — protests over racial segregation, income inequality, labor exploitation and disenfranchisement.

She refuses to let the world forget.

After studying at elite schools such as Brown University, where she took her first formal class in Mexican-American history, and Yale University, where she earned her Ph.D. in American Studies, she pursued post-doctoral work at the University of Texas and joined a research team of five historians that examined extrajudicial violence in South Texas, especially during the early 20th century.

The group calls its efforts “Refusing to Forget.”

This team of scholars provided the historical content for the award-winning 2016 exhibit at the Bullock Texas State History Museum, “Life and Death on the Border,” which introduced a list of some 250 ethnic Mexicans — a term scholars use whether they refer to Mexican-Americans or Mexican nationals, fluid designations for years in the borderlands — lynched in Texas from 1850 to 1930.

She and her colleagues followed that landmark publication this year with a symposium at the Bullock that carefully laid out the findings of the 1919 Canales Investigation by a joint committee of the Texas Legislature. This rare official search for justice chronicled many of the misdeeds — some by police, military and the Texas Rangers — and how the perpetrators were rarely punished. The 2019 gathering in Austin included some families of the victims of violence from more than 100 years ago.

“This was the moment in 1919 when we asked, as a state, are we going to endorse mob violence or going to suppress it and take the advice of civil rights groups?” Martinez says, adding that the Canales Investigation coincided with a rise in violence and lynching against African-Americans in Texas, actively opposed by groups such as the NAACP. “The state decided to not take action, which, of course, emboldened white supremacists.”

“It was ironic to travel 2,000 miles to first learn about Mexican-American history in a systematic way,” Martinez says. “I learned about racial formation in Texas as well as the laws, wars and history that impact the racial reality in Texas.”

In a class taught by Maria Josefina Saldaña, she saw the 1982 movie “Ballad of Gregorio Cortez,” based on Americo Paredes’ groundbreaking book, “With His Pistol in His Hand,” and read David Montejano’s “Mexicans and Anglos and the Making of Texas, 1836-1986.” During graduate school at Yale University, she delved deeper into Texas violence in an interdisciplinary way with professors such as Joanne Meyerowitz and Alicia Schmidt Camacho.

She returned to her home state to collect family memories.

“I wanted to study the longer legacies of violence,” she says. “Historians think in terms of concrete time frames. But now I was meeting descendants who were still being impacted by the violence. It still resonates today.”

“Here I was at the home of Americo Paredes and Walter Prescott Webb,” Martinez says, noting two UT scholars who had helped shape the way Americans thought about the borderlands — from two very different perspectives. Paredes and Webb parted ways especially on the controversial subject of the Texas Rangers, which in the early 20th century were a law unto themselves along the border.

The five co-founders of “Refusing to Forget,” including Martinez, started meeting in 2013.

“We discussed the gap between academic history and what people had access to in public history,” she says. “We started by identifying descendants of victims who preserved private collections. The Library of Congress, after all, has no images of those murders. And Texas State Library and Archives tells the stories from the point of view of Texas Rangers.”

Martinez and her team used oral history to fill in the gaps. She found that, contrary to assumptions, the families of the victims had never forgotten the violence, even if it was not widely reported at the time.

“These oral histories not only compelled me to learn more about the events and to help preserve family memories, but also to make those things public,” Martinez says. “Generations carried the memory privately within the families. And state institutions need to acknowledge this tragedy in our past.”

Historians estimate that more than 5,000 of these deaths occurred between 1910 and 1920. Work is ongoing on a map of the violence.

“To understand all this, however, we had to move beyond a body count, ” says Martinez, who now teaches at Brown. “We also looked at those intimidated by the violence or who lived in terror. We continued to fill out the records with an understanding we will never have a complete list.”

It never leaves you

The cover photograph on Martinez’s book, taken by Otis A. Aultman in 1910, shows nine Anglo men in brimmed hats standing in a row. Four of them aim their frontier firearms at three ethnic Mexicans seated or squatting beneath them, as if their conquered captives might escape. The Mexicans hold their sombreros in their hands. Two cast their gazes downward, but one, who looks barely old enough to ride a horse, looks directly at the camera.

The scene, like so many others during that period, was staged. In these widely distributed prints, often used for postcards, ethnic Mexicans are labeled “bandits” or “revolutionaries,” the better to promote greater police or military attention to the border.

Indeed, the border region attracted political and criminal activities during the Mexican Revolution (roughly 1910-1920). Yet oral histories, court records and legislative investigations now convince scholars that the ethnic Mexican victims of mob violence were rarely either bandits or revolutionaries.

Martinez spotted and recorded another one of these cultural artifacts on the wall of a Dairy Queen in the Uvalde County town of Sabinal that showed something even more chilling.

It was a photo of lynching. The Dairy Queen staff assumed the victim was an ethnic Mexican.

Martinez builds three of her chapters in her book around very different stories: a horrific lynching in Rocksprings, the murder of two respected ranchers in Hidalgo County, and the West Texas massacre of men and boys in the village of Porvenir.

“For each of these three signal cases, there are hundreds of others that deserve that kind of attention,” Martinez says. “Yet these cases help us expand the idea of who the victims were. When they burned alive a Mexican laborer in Rocksprings, for instance, that brought international attention and brought into question ideas of citizenship, class and origins.”

But memory worked quite differently in different cases. In Hidalgo County, two prominent Hispanic citizens — one an elected official — were openly killed, but there was no investigation, no mentions in newspaper accounts.

“It shows how extensive and pervasive the culture of impunity was,” Martinez says. “In the case of Porvenir, lots of historians know about it, and we are fascinated by the legal cases filed by survivors. People think it ended with the Texas Ranger captain who was forced to resign, or when it was investigated by the Legislature in 1919. But really families were filing claims into the 1930s.”

Martinez’s legal and legislative research led to other cases of parents, children or widows taking claims to court. The Porvenir massacre produced 15 primary victims. Multiple survivors and descendants came away with different experiences.

“One child who was a witness was impacted throughout his life, including the suicide of his mother,” Martinez says. “Bedtime versions of these tales tend to end with the families departed, never to be heard from again, but in reality, the suffering continued for generations.”

Martinez also looks beyond the ethnic Mexican victims in her book. The name of a murdered Anglo rancher’s wife in Rocksprings, whose death led to the terrible lynching, for instance, was not even mentioned in newspaper reports of the time.

“How do you recover that lost humanity?” Martinez says. “The same lens is used looking at any dead party. The rancher’s wife’s name not published and even finding out her full name, too, meant traveling to Rocksprings. The memory is held in graveyards.”

Attempting to amend the public history through historical markers and community events has proven to be another challenge. Repeatedly, Martinez’s applications for state historical markers at the sites of the best documented atrocities were rejected for different reasons. Usually, markers must be approved by county historical commissions, which are less likely in some parts of the state to acknowledge the darker side of history. That’s the whole reason for the Texas Historical Commission’s Undertold Markers program, which helped Martinez and others commemorate four of the cases of anti-Mexican violence.

“Some of the history is silent or erased,” Martinez says. “The Rangers were eventually professionalized. But governors actually undermined civil rights. For instance, Gov. William P. Hobby (served 1917-1921) would publicly say, ‘We say we need to stop lynching.’ But he didn’t pass anti-lynching legislation on the state level and did not seek prosecution of Rangers.”

Time and again in her book, Martinez takes after distinguished historian Walter Prescott Webb, whose “The Great Plains: A Study in Institutions and Environment” (1931) is still considered a masterpiece of the academic historical genre. Yet he also wrote “The Texas Rangers,” a popular 1935 book timed to the 1936 Texas Centennial. In it, Webb glorified the Texas Rangers while ignoring their documented atrocities during the Indian Wars and on the border during the Mexican Revolution.

“Webb helped build public history in Texas,” Martinez says. “He creates the myth of Texas Rangers, which led to all these books and films that came after him. The Rangers went from being a Texas icon to being an international icon. I’ve been yelled at in places like Long Island, ‘How dare you! I grew up watching movies about the Rangers!’ But what Webb did in creating the myth was a justification for their actions: White men are the arbiters of progress and democracy; Indians are savages; and Mexicans have dirty blood. There are passages in the book that are still painful. And 100 years later, that’s still with us.”

Ever the fair historian, Martinez points out that Webb encouraged UT Press to publish Paredes’ criticisms of “The Texas Rangers” in “With a Pistol in His Hand” during the 1950s. And when President Lyndon B. Johnson wanted UT Press to republish “The Texas Rangers” in 1965, Webb insisted that it be updated to include the ethnic Mexican points of view absent from the 1935 edition.

“He realized that it was out of step,” Martinez says of Webb. “He dies in a car accident before he could update it. UT Press printed the old version anyway and LBJ celebrates it again.”