Albert Laguna op-ed in the Washington Post: American tourists want to see a Cuba that Cubans would rather leave behind 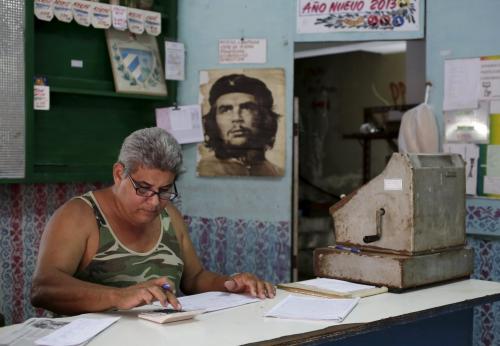 Albert Laguna is Assistant Professor at American Studies and ER&M

President Obama’s trip to Cuba later this week, the first by a sitting U.S. president in 88 years, marks a new chapter in U.S.-Cuba relations. This event, in conjunction with the recent announcement that commercial flights to the island will begin this year, has generated a surge of interest in travel to the island among Americans. Much of the excitement around traveling to Cuba can be best captured in a phrase I have been hearing with increasing regularity since relations began to warm: “I want to see Cuba before it changes.”

What “changes,” exactly, do people want to avoid seeing when they visit Cuba? The arrival of U.S.-style capitalism? A post-Castro political era? Whatever those changes travelers wish to avoid may be, they stand in stark contrast with the will of the Cuban people, who are very much invested in any change that would bring a brighter future to the island.

Cuba has long served as a canvas for the projection of American fantasies. This reality has resulted in a lack of appreciation for the complexities of life on the ground for most Cubans and the role of the United States in producing them.

Before the 1959 Cuban Revolution, the slogan “So Near and Yet So Foreign” was commonly used to market Cuba as a destination for U.S. tourists. By all measures, it was successful. Throughout the first half of the 20th century, Americans traveled to Cuba in droves seeking a “foreignness” measured less in the Spanish language and more in what the island could offer those seeking “pleasures” restricted in the United States: alcohol during Prohibition, drugs, gambling and prostitution.

The mood in Havana is upbeat as the city prepares to greet U.S. president Barack Obama. After decades of hostility between Cuba and Washington, and a U.S. trade embargo, many here see the visit as a sign of a stronger economic future. (Reuters)

While Americans experienced Cuba as an escape from everyday life, enjoying luxurious hotels and spectacular entertainment, the Cuban people faced significant hardships in the tumultuous 1950s. Despite some strong economic indicators on paper, unemployment was a major problem, the price of food and basic commodities rose considerably, corruption was rife and political dissenters were violently silenced by the government of U.S.-backed leader Fulgencio Batista. It was under these conditions that Fidel Castro swept into power in 1959.

The Cuba that American tourists loved so much was suddenly gone, but it was not forgotten. It has been memorialized, with a great deal of nostalgia, by Hollywood, your local coffee shop playing the Buena Vista Social Club and Cuban restaurants adorned in sepia prints of cigars and serving overpriced plantains. More than 50 years after the revolution, this fantasy Cuba remains a fixture in the American imagination.

While Cuba has changed a great deal since U.S. commercial flights last flew routes to Havana, “So Near and Yet So Foreign” still rings true for travelers. But now, the “foreignness” of Cuba as a place that has resisted capitalism and commercialization joins rum and daiquiris as part of the island’s romantic appeal. This romance is captured in every selfie taken with an old Chevy held together with parts from abroad. Pictures of dilapidated buildings in Havana are affectionately referred to as “weathered” and “vintage” while city dwellers wonder whether the next storm will bring the roof crashing down.

Today, due in part to the U.S. embargo and decades of Cuban government mismanagement and stubbornness, Cuba still faces many of the same challenges present in the 1950s. The average Cuban salary is around $20 a month while food prices continue to rise despite new attempts at institutingprice controls. Highly educated Cubans have trouble finding jobs that will allow them to support their families. According to Human Rights Watch, the “Cuban government continues to repress dissent and discourage public criticism.” For many American travelers, the romance of Cuba as a place “frozen in time” obscures these realities.

The rising rate of American travel to the island signals a once-in-a-generation opportunity to reset the dynamic between the people of Cuba and the United States. As tourists once again begin to travel to the island in droves, we must be mindful of what our long fascination with Cuba has historically occluded if we are to avoid past mistakes and build a healthy relationship with a country whose history is so deeply entwined with our own. Instead of indulging in romantic fantasies of visiting a Cuba that is “So Near and Yet So Foreign,” Americans need to welcome and support the changes that Cubans so crucially need and desire.