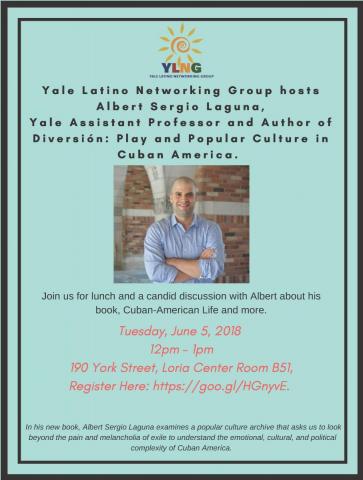 Albert Sergio Laguna is Assistant Professor of American Studies and Ethnicity, Race, and Migration, and Director of Undergraduate Studies in American Studies. Join a candid conversation with Professor Laguna as he discusses his new book Diversion: Play and Popular Culture in Cuban America.

Event Description:
In an era of warming relations between the US and Cuba, this book updates the conversation about Cuban America by showing how this community has changed over the past 25 years. No longer a conservative Republican voting bloc, the majority of Cubans today want more engagement with the island instead of less. Laguna investigates the generational shifts and tensions in a Cuban America where the majority is now made up of immigrants who arrived since the 1990s and those born in the US.

To probe these changes, Laguna examines the aesthetic and social logics of a wide range of popular culture forms originating in Miami and Cuba from the 1970s through the 2010s. They include the stand-up comedy of performers like Alvarez Guedes and Robertico, a festival called Cuba Nostalgia, Miami morning radio shows, a form of media distribution on the island known as el paquete, and the viral social media content of Los Pichy Boys. This study illustrates the centrality of play in a community that has been described historically as angry, reactionary, and melancholic. Diversión contends that our understanding of the Cuban diaspora is lacking not in seriousness, but in play.

By unpacking this archive, Laguna explores our complex, often fraught attachments to popular culture and the way it can challenge and reproduce typical cultural ideologies—especially in relation to politics and race. In the wake of the largest migration wave to the US in Cuban history, Diversión and its focus on play is crucial reading for those who seek to understand not only the Cuban American diaspora, but cultural and economic life on the island.

Lunch will be served.