The Society of Fellows in the Humanities Presents “Managing Borders” 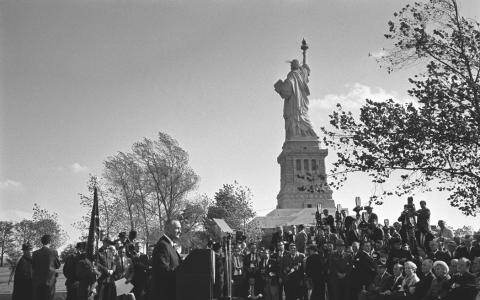 The Society of Fellows in the Humanities presents “Managing Borders: An Interdisciplinary Conference on American Immigration Marking the 50th Anniversary of the Immigration and Nationality Act of 1965.”

In October 1965, President Lyndon B. Johnson signed the Immigration and Nationality Act. Abolishing the national origins quota system, which had heavily restricted immigration from Asia and southern and eastern Europe for decades, the act introduced new systems that placed preference on immigrants’ occupational qualifications and family ties with the United States. This new arrangement resulted in a significant expansion of immigration from Asia and Latin America. At the same time, by newly setting a numerical limit on immigration from the Western Hemisphere, which badly failed to cater to the need of immigration to the United States for people in Latin America, the act led to the increase of illegal entry from the region. The Immigration and Nationality Act of 1965, also known as the Hart-Celler Act, thus decisively shaped the patterns of immigration to the United States and global migration that still continue today. This conference aims to use the 50th anniversary of this pivotal legislation in 2015 as an opportunity to explore the latest scholarship on American immigration, assess the state of the field, and identify new tasks and challenges for immigration scholars.

Coming from a wide range of academic disciplines, including history, literature, cultural studies, sociology, anthropology, political science, and law, participants in this interdisciplinary conference collectively seek to achieve a better understanding of issues and problems associated to American immigration today under the theme of “Managing Borders.” Broadly defined, “Managing Borders” encourages participants to examine the diverse roles of real and imaginative “borders” in the history of American immigration up to the present. How has the government developed and implemented policies for border control? How have immigrants crossed various kinds of borders and how were their border-crossing experiences like? How have social, cultural, economic, racial, and psychological factors shaped the relationship, a form of border, between citizens and noncitizens, between ethnic groups, or within a single ethnic group? How has immigration to the United States, or border-crossing to America, fitted into broader trends of global migration? How have scholars conceptualized various types of borders in the study of American immigration and global migration? Finally, what kinds of disciplinary borders now exist in migration scholarship, and how can we transcend them? As a whole, the conference hopes to provoke conversations that would lead the study of American immigration in an age that is simultaneously borderless and border-raising.