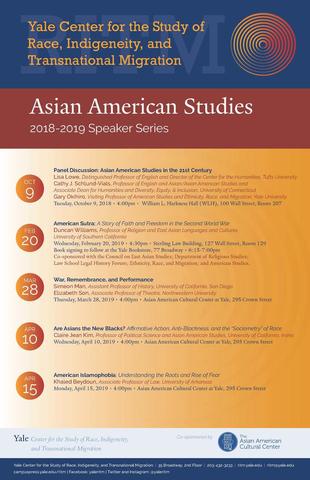 Professor Elizabeth Son and Professor Simeon Man, will discuss their recently published works: Soldiering through Empire: Race and the Making of the Decolonizing Pacific and Embodied Reckonings: “Comfort Women,” Performance, and Transpacific Redress.” The authors will situate their works within Asian American studies historiography and discuss future directions for research and critical inquiry.

Her research focuses on the interplay between histories of gender-based violence and contemporary performance in the United States and South Korea. She teaches courses on theatre and social change; race, gender, and performance; and performance, memory, and violence in U.S. and transnational contexts. Her book Embodied Reckonings: “’Comfort Women,’ Performance, and Transpacific Redress” (University of Michigan Press, 2018) examines the political and cultural aspects of contemporary performances in South Korea, Japan, and the United States that have grappled with the history of Japanese military sexual slavery.

Son’s current book project titled “Possessing History” explores how Korean and Korean American women artists and activists engage with histories of political unrest, militarism, and displacement on the Korean peninsula through site-specific methods. Her scholarly articles have appeared in Asian Theatre Journal, Theatre Survey, Theater, and e-misférica. She also writes op-eds, which have appeared in such publications as the Los Angeles Review of Books and The Hill.

Simeon Man is Assistant Professor of History at UC San Diego. He specializes in Asian American history and transnational U.S. history, with a focus on the politics of race and empire. He received his Ph.D. in American Studies at Yale University in 2012. Before joining the faculty at UC San Diego, he was an Andrew W. Mellon Postdoctoral Fellow at Northwestern University (2012-14) and a Provost’s Postdoctoral Scholar in the Humanities at the University of Southern California (2014-15).

His first book, “Soldiering through Empire: Race and the Making of the Decolonizing Pacific” (University of California Press, 2018), is a cultural history of the U.S. military in Asia and the Pacific after World War II. The book explains how the United States mobilized citizens from nations and territories throughout the region for the U.S. war in Vietnam (1954-1975), and how these soldiers and workers, in turn, became active participants in the unfinished struggles for global decolonization.

Prof. Man teaches introductory courses in Asian American history and U.S. transnational history, and specialized courses in the history of social movements, race and war in U.S. culture, and the United States and the Pacific world. He is an affiliate faculty member of the Department of Ethnic Studies and the Program in Critical Gender Studies.