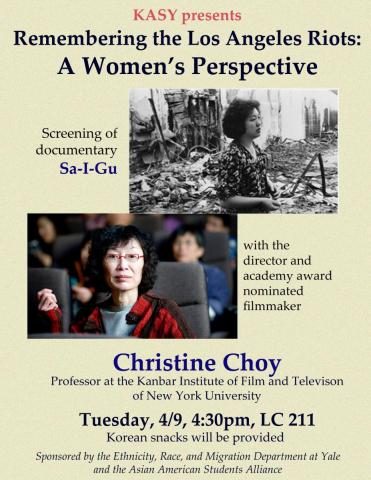 What? A Screening of the documentary Sa-I-Gu and Q&A with the director and the academy award nominated filmmaker Professor Christine Choy, Professor at the Kanbar Institute of Film and Television of New York University

The Los Angeles Riots of 1992 were the largest civil uprising in U.S. history and the first to truly involve multiple minorities. The story of Korean-American shop owners, many of whom were devastated by the violence and looting, is often forgotten. We will screen the documentary Sa-I-Gu, produced and directed by Christine Choy, a film professor at NYU and academy award nominated documentary filmmaker, which shares the unique perspective of Korean-American women affected by the riots. A short question and answer session will follow. Korean snacks will be served.