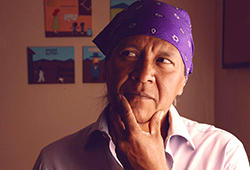 Co-sponsored by Ezra Stiles College, The Yale Center for the Study of Race, Indigeneity, and Transnational Migration (RITM), and the Native American Cultural Center.

Ricardo Caté of Santo Domingo Pueblo is the most prominent Native American cartoonist working today. His immensely popular cartoon “Without Reservations” is published daily in the Santa Fe New Mexican and Taos News, and explores the irony and poignant humor found in the Native American experience of living in dominant culture. Caté is the only Native American cartoonist whose work is carried by a daily mainstream newspaper. Many of his comics are included in his book, “Without Reservations: The Cartoons of Ricardo Caté.” He has three children and lives in Santo Domingo Pueblo, where he participates in feast day dances and traditional cultural events.