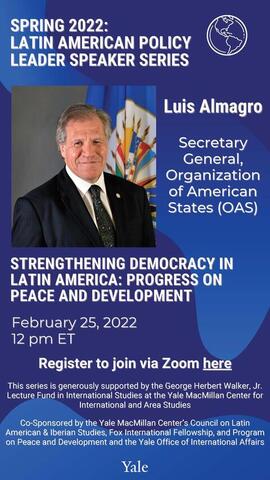 The Yale MacMillan Center Council on Latin American and Iberian Studies, Fox International Fellowship Program, and Program on Peace and Development are delighted to announce the 2022 Latin American Policy Leader Series.
From January to May 2022, the Yale community will have the opportunity to hear from and discuss with high-level Latin American experts and policymakers about how we can work together towards a more equal and just world.
First Session: Strengthening Democracy in Latin America: Progress on Peace and Development
Luis Almagro, Secretary-General of the Organization of American States (OAS). Moderated by Ana de la O (Political Science).

Although it is not perfect, democracy is the system that best consolidates a just and fair form of government, which gives a voice to all people so that they can exercise their rights and freedoms safely. However, in recent years we have witnessed how democracy has been threatened. From elected leaders who have gradually subverted the democratic process to increase their power to manipulating elections through misinformation and fake news, the democratic system has become progressively weaker and more fragile. This has led to increasingly polarized societies, not only politically, but socially. There appears to be more intolerance, discrimination and exclusion. Luis Almagro, Secretary General of the Organization of American States, is going to talk about the challenges facing democracies as well as what we can do to strengthen our and institutions so that they can stand up to corruption. He will also discuss how to fight social polarization and promote inclusion and equality.

Luis Almagro was first elected as Secretary General of the OAS on March 18, 2015, with the support of 33 of the 34 member states and one abstention. He was re-elected for a second term on March 20, 2020.
A career diplomat, he has extensive regional and international experience. Almagro was Uruguay’s foreign minister between 2010 and 2015. Under his tenure, Uruguay set new records in the growth of its exports. He also defined several landmark initiatives of President José Mujíca’s government that put the country on the global map. Uruguay welcomed former prisoners from Guantanamo, granted asylum to dozens of Syrian families who were victims of civil war, and secured the endorsement of the Group of Latin America and Caribbean Countries (GRULAC) for its election to a seat on the United Nations (UN) Security Council in January 2016.
Almagro was also ambassador to China for three years, after occupying senior diplomatic posts in his country’s foreign ministry and at its embassies in Germany and Iran. In addition, he was elected as a senator in Uruguay’s national elections in October 2014.
Almagro is a lawyer by profession and has seven children. Apart from Spanish, he speaks English and French.