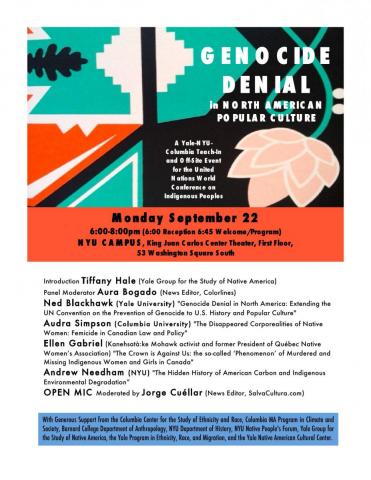 New York University will hold on September 22 a teach-in on “Genocide Denial in North American Popular Culture.” Organized as an off-site event of the UN’s World Conference on Indigenous Peoples (UNWCIP), this event invites UNWCIP participants, Indigenous and environmental activists, students, and scholars, and concerned community members to discuss the contemporary legacies of Indigenous genocide in North American history and culture.

Jointly coordinated by NYU, Columbia, and YGSNA, the teach-in will link previous UN conventions, resolutions, and definitions of ‘genocide’ with North American cultural and historiographical practices, with the Canadian government’s inability to investigate the disappearances and murders of Indigenous women, and with the destructive practices of carbon extraction within Southwestern Native homelands. Teach-in participants are also invited to voice their concerns during an extended open mic session that will conclude the evening.

A catered buffet reception will begin the event at 6pm with formal introductions and welcomes to follow at 645.

Ellen Gabriel (Kanehsatà:ke Mohawk activist and former President of Québec Native Women’s Association) “The Crown is Against Us: the so-called ‘Phenomenon’ of Murdered and Missing Indigenous Women and Girls in Canada”