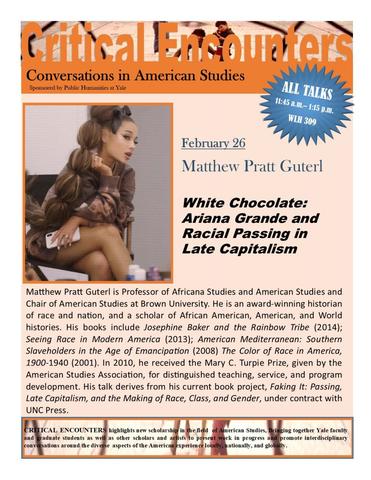 Matthew Pratt Guterl is Professor of Africana Studies and American Studies and Chair of American Studies at Brown University. He is an award-winning historian of race and nation, and a scholar of African American, American, and World histories. His books include Josephine Baker and the Rainbow Tribe (2014); Seeing Race in Modern America (2013); American Mediterranean: Southern Slaveholders in the Age of Emancipation (2008) The Color of Race in America, 1900-1940 (2001). In 2010, he received the Mary C. Turpie Prize, given by the American Studies Association, for distinguished teaching, service, and program development. His talk derives from his current book project, Faking It: Passing, Late Capitalism, and the Making of Race, Class, and Gender, under contract with UNC Press.