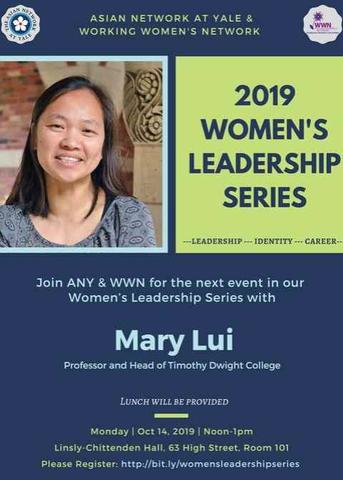 Asian Network at Yale (ANY) and Yale’s Working Women’s Network (WWN) jointly sponsor the 2019 Women’s Leadership Series. The focus of the Women’s Leadership Series is to bring together a diverse mix of Yale’s own successful women leaders who, through the discussion of topics relevant to today’s issues, will inspire and encourage women to reflect on their own goals and status as they strive to advance in their careers and lives. The format for the Leadership Series will consist of a moderated discussion with the speaker that will delve into topics of interest in which the speaker will share her personal and professional perspectives on questions. The themes of the series are Leadership, Identity, Career, Well-being, and Service.
Professor Mary Ting Yi Lui, Head of College of Timothy Dwight College, is a member of the faculty of the American Studies program and the History department. She is also affiliated with the programs Ethnicity, Race, and Migration and Women, Gender, and Sexuality Studies. Her research and teaching focuses on Asian American history, urban history, women and gender studies, and public history. Her first book, The Chinatown Trunk Mystery: Murder, Miscegenation, and Other Dangerous Encounters in Turn-of-the-Century New York City, was awarded a 2007 best book prize for history from the Association of Asian American Studies. She recently appeared in a documentary film on the history of Chinese Exclusion Act directed by acclaimed filmmakers Ric Burns and Li-Shin Yu that aired on PBS’s American Experience in May 2018.
RSVP: http://bit.ly/womensleadershipseries