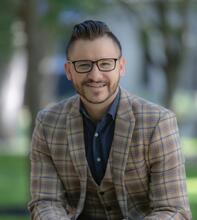 Kris Klein Hernández is Postdoctoral and Faculty Fellow at Yale’s Center for the Study of Race, Indigeneity, and Transnational Migration (RITM), and Lecturer in Ethnicity, Race, & Migration (ERM).  His scholarship, which explores comparative racialization within the nineteenth-century American Southwest, is situated at the nexus of Latinx Studies and Borderlands History.  Klein Hernández teaches courses on nineteenth and twentieth-century Latinx history; U.S. imperialism and empire; race and gender from the early republic to World War I; and the history of the military.

He is currently working on a book project based upon his dissertation, “Militarizing the Mexican Border: A Study of U.S. Army Forts as Contact Zones.”  It examines how racial anxieties emanating from military bases and its officers affected ethnic Mexicans, freed African Americans, and Native peoples residing within their orbits, causing cultural and material change through Texas, the New Mexico Territory, and Mexico.  Through an analysis of writings (travel literature, diaries, letters, publications) that army personnel produced while in federal forts, it shows how early militarization was shaped through ethnological knowledge and the comparative racialization of border communities.